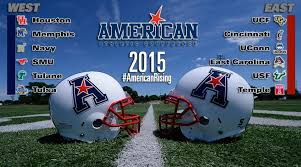 UAB drops out of Conference USA and football altogether.

On November 30, 2014, a day after the Blazers had become bowl eligible for only the second time in program history, Sports Illustrated reported that UAB was planning to fire athletic director Brian Mackin and end the football program.

With an all-time record of 118–153–2 (.436), 1 losing bowl appearance and only their 1st head coach Jim Hilyer having a winning record, it’s sad to say, but it looks like only their rivals Southern Miss and Troy will miss beating them up.

A founding member of Conference USA (C-USA), Charlotte rejoined the conference in 2013 after spending eight years as a member of the Atlantic 10 Conference. Previously, Charlotte was a charter member of the Sun Belt Conference and was a member the Metro Conference. With football upgrades on the horizon, and an attempt to restore geographic rivalries, Charlotte returned to a revised Conference USA starting with the 2013-2014 academic season, except for football, where they join in 2015, and will be fully eligible in 2016. As Independents for the last 2 years, Head Coach Brad Lambert has finished 5-6 both years and looks to continue filling UAB’s shoes as conference punching bags for at least a few more years.

Navy goes from Independent to the American Conference

The Naval Academy completed its final season as an FBS independent school (not in a conference) in 2014, and became a single-sport member of the American Athletic Conference beginning in the 2015 season. With a winning football tradition since 1879 and an overall record of 671–539–57, this move might make some serious noise on our radar!!! Since Paul Johnson took over a 2-10 team in 2002, he and their current coach Ken Niumatalolo have compiled an overall record of 97-54 (.642) a 5-6 Bowl record, and a #24 National Ranking. With rivalries like Army, Air Force, Notre Dame, they will be tested out of conference, meanwhile their in-conference teams will be without a doubt at a loss to handle the efficiency of the triple-option threat for their 1st year. With East Carolina coming in just last year and having no real history with Navy, I can see a LOCK OF THE YEAR type game coming on September 19th!!!!!!!!!