You are here: Home / Archives for Andre Roberson 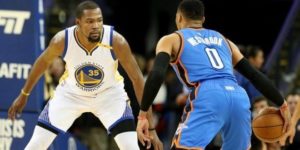 10:30 PM EST, TNT - Line: Warriors -10,  Over/Under: 230 With football finally in the rearview mirror, basketball takes full control as the NBA charges into it's most chaotic point of the season on the eve of the Trade Deadline, shortly followed by the All-Star Break.  This is the point of the term in which teams start to show some serious signs of fatigue, having only been further exaggerated by injuries, which is precisely where we find the … END_OF_DOCUMENT_TOKEN_TO_BE_REPLACED

8:00 PM EST, TNT - Line: Rockets -7.5,  Over/Under: 224 Expect fireworks tonight at the Toyota Center, as the Houston Rockets host the Oklahoma City Thunder in Game Two of the First Round of the NBA Playoffs, with the aim of taking a commanding two-game lead before the series shifts north.  With the Postseason unfolding over the past weekend, the matchup that perhaps offered the most entertainment value was between these two teams, as the … END_OF_DOCUMENT_TOKEN_TO_BE_REPLACED