You are here: Home / Archives for Dante Fowler

1:05 PM EST, CBS - Line: Jaguars -9,  Over/Under: 39 There is no better example of parity in the National Football League than today's matchup featuring a pair of teams that have returned to the Playoffs after what has felt like ages, as the Jacksonville Jaguars host the Buffalo Bills in the AFC Wild Card Playoff from EverBank Stadium in Jacksonville, Florida.  Finally, the longest Postseason Drought in our country's four major professional … END_OF_DOCUMENT_TOKEN_TO_BE_REPLACED 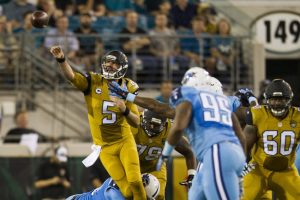 8:25 PM EST, NFL Network - Line: Titans -3,  Over/Under: 44 The AFC South may be the weakest division in the NFL for yet another season, but you can't say that it's not competitive as the Tennessee Titans host the Jacksonville Jaguars from Nissan Stadium in Nashville on Thursday Night Football.  That's right, folks, for despite combining for a grand total of seven victories thus far, these teams are only one and two games behind Houston for … END_OF_DOCUMENT_TOKEN_TO_BE_REPLACED