You are here: Home / Archives for De’Runnya Wilson 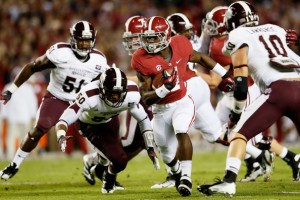 3:30 PM EST, CBS - Line: Alabama -10 After today the College Football Playoff should clear up considerably as the fifth-ranked Alabama Crimson Tide host the top-ranked Mississippi State Bulldogs in Tuscaloosa, with the winner in the driver's seat in the SEC West.  In his sixth season in Starkville, Dan Mullen has Mississippi State (9-0, 5-0 in SEC) atop the AP Poll for the fifth consecutive week, and at nine wins he has already matched his highest … END_OF_DOCUMENT_TOKEN_TO_BE_REPLACED