You are here: Home / Archives for JT Barrett 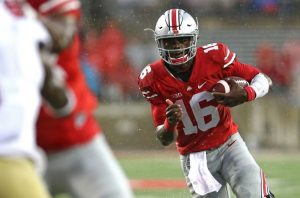 8:30 PM EST, ESPN - Line: Ohio State -7.5,  Over/Under: 64.5 This year the Cotton Bowl Classic has a Rose Bowl feel to it, featuring a matchup between the respective champions of the Pac-12 and Big Ten, as the Eighth-Ranked Southern California Trojans battle the Fifth-Ranked Ohio State Buckeyes at AT&T Stadium in Arlington, Texas.  Typically, this would be an encounter reserved for the pageantry of the Rose Bowl, but due to that particular … END_OF_DOCUMENT_TOKEN_TO_BE_REPLACED 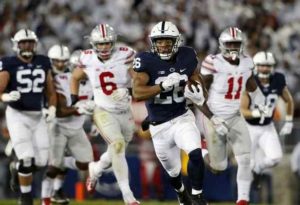 3:30 PM EST, FOX - Line: Ohio State -6.5,  Over/Under: 57 A titanic clash in the Big Ten with major implications for the College Football Playoff takes place in Columbus, Ohio, as the Second-Ranked Penn State Nittany Lions continue their murderer's row of opposition, with the Sixth-Ranked Ohio State Buckeyes desperate for payback after last season's thrilling meeting.  Indeed, life is good for Penn State (7-0, 4-0 in Big Ten) at the moment, who … END_OF_DOCUMENT_TOKEN_TO_BE_REPLACED 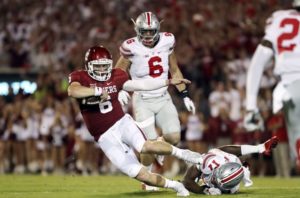 7:30 PM EST, ABC - Line: Ohio State -7.5,  Over/Under: 63.5 For those of you who were left disappointed by last week's Top-Five matchup, an opportunity to rectify matters has presented itself as the Second-Seeded Ohio State Buckeyes host the Fifth-Ranked Oklahoma Sooners in a pivotal nonconference battle form Ohio Stadium, in Columbus, Ohio.  Tonight's contest is a rematch of one of last year's more heralded matchups, even if that particular … END_OF_DOCUMENT_TOKEN_TO_BE_REPLACED 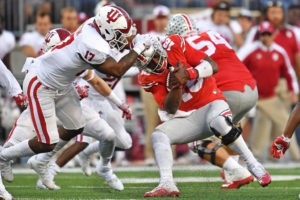 8:00 PM EST, ESPN - Line: Ohio State -20.5,  Over/Under: 56.5 After a small sample last Saturday, the 2017 College Football Season gets off to it's formal start tonight, as the Second-Ranked Ohio State Buckeyes strap up for an early conference clash with the Indiana Hoosiers from Memorial Stadium, in Bloomington, Indiana.  When last we saw Ohio State, Urban Meyer's charges were absolutely embarrassed in the College Football Playoff, as eventual … END_OF_DOCUMENT_TOKEN_TO_BE_REPLACED 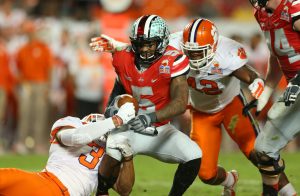 7:0 PM EST, ESPN - Line: Ohio State -3,  Over/Under: 59 Of the two National Semifinals, the latter certainly has the requisite entertainment value associated with this particular stage, as the second-ranked Clemson Tigers battle the third-ranked Ohio State Buckeyes in PlayStation Fiesta Bowl, a matchup of adversaries that resemble mirror images of one another.  The last time Clemson (12-1, 7-1 in ACC) was on this stage, the ACC Champions very … END_OF_DOCUMENT_TOKEN_TO_BE_REPLACED