You are here: Home / Archives for Karl Joseph 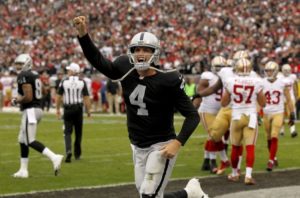 8:20 PM EST, NFL Network - Line: 49ers -3,  Over/Under: 46 Hard times have fallen on the Bay Area of late, as their two resident football teams meet as the San Francisco 49ers host the Oakland Raiders at Levi Stadium in Santa Clara, California, in a matchup of teams without much to play for at this point, though for different reasons.  Change and transition would be the best way to describe the campaign thus far for the Raiders (1-6, 4th in AFC … END_OF_DOCUMENT_TOKEN_TO_BE_REPLACED