You are here: Home / Archives for Ken Norton Jr. 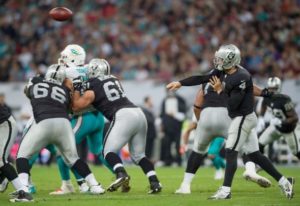 8:30 PM EST, NBC - Line: Raiders -3,  Over/Under: 44 A pair of Playoff Teams from 2016 that have found themselves mired in chaos meet tonight in South Beach in an effort to finally figure things out before it's too late, as the Miami Dolphins host the Oakland Raiders from Hard Rock Stadium in Miami, Florida.  After ending a fourteen-year postseason drought, the question in regards to the Raiders (3-5, 3rd in AFC West), would be if they indeed … END_OF_DOCUMENT_TOKEN_TO_BE_REPLACED