You are here: Home / Archives for Mark Helfrich 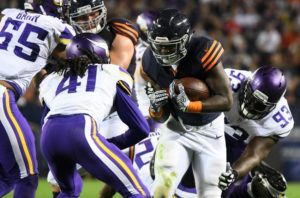 Our 2018 Regular Season Preview takes us to the Windy City, where we'll meet the Chicago Bears, who are in the midst of a soft reset after starting over just three years ago.  After a third consecutive season without the Playoffs, veteran Head Coach John Fox was ousted after putting together a disappointing 14-34 Record (.292) over that span.  However, despite the clear lack of production in the Win Column, the former skipper did a solid job laying … END_OF_DOCUMENT_TOKEN_TO_BE_REPLACED 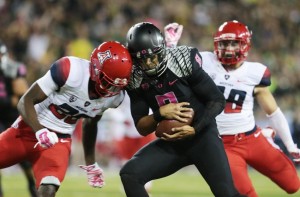 9:00 PM EST, FOX - Line: Oregon -15.5 Major postseason implications are on the line tonight, as the second-ranked Oregon Ducks battle the seventh-ranked Arizona Wildcats in the Pac-12 Championship Game at Levi's Stadium in Santa Clara, California.  This is the second meeting between these teams this season, as the Wildcats (10-2, 7-2 in Pac-12) went to Autzen Stadium in Eugene, and pulled off arguably the upset of the year, defeating the formerly … END_OF_DOCUMENT_TOKEN_TO_BE_REPLACED 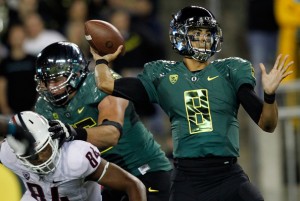 10:30 PM EST, ESPN - Line: Oregon -23.5 Two of the three remaining unbeatens in the Pac-12, face off tonight in Eugene, as the second-ranked Oregon Ducks host the Arizona Wildcats.  Revenge should be on the minds of the Ducks (4-0, 1-0 in Pac-12), who were battered 42-16 at Arizona last season despite owning a 9-1 record heading into the contest, effectively ending their run of four consecutive BCS Bowl appearances.  Star Quarterback Marcus … END_OF_DOCUMENT_TOKEN_TO_BE_REPLACED