You are here: Home / Archives for NFL Playoffs 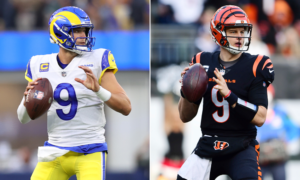 6:30 PM EST, NBC - Line: Rams -4.5, Over/Under: 48.5 Finally, the longest season in National Football League history comes to its conclusion tonight in the City of Angels, as the upstart Cincinnati Bengals look to claim their first Lombardi trophy in franchise history, while the Los Angeles Rams attempt to become the second consecutive NFL Champion to earn that distinction on their home field, in this, Super Bowl LVI from SoFi Stadium in Los … END_OF_DOCUMENT_TOKEN_TO_BE_REPLACED 6:30 PM EST, FOX - Line: Rams -3.5, Over/Under: 46 The final participant in Super Bowl LVI will be decided this evening as the surging San Francisco 49ers and Los Angeles Rams get set for a third encounter this season, though the stakes are much higher for both sides in this NFC Championship Game from SoFi Stadium in Los Angeles, California. The lowest-seeded team remaining in the postseason, the 49ers (10-7, 3rd in NFC West) have indeed crashed … END_OF_DOCUMENT_TOKEN_TO_BE_REPLACED 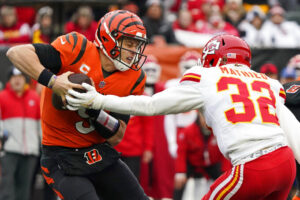 3:00 PM EST, CBS - Line: Chiefs -7, Over/Under: 54.5 After a weekend that is annually referred to as the most entertaining in the National Football League managed to exceed expectations, we're down to the final four teams as the upstart Cincinnati Bengals prepare for a rematch with the Kansas City Chiefs, though the stakes are much greater this time around in this afternoon's AFC Championship from GEHA Field at Arrowhead Stadium in Kansas City, … END_OF_DOCUMENT_TOKEN_TO_BE_REPLACED 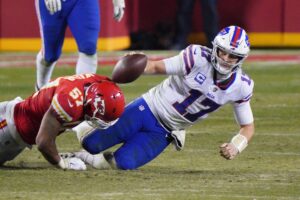 6:30 PM EST, CBS - Line: Chiefs -1.5, Over/Under: 54 The last of the Divisional Round matchups could very well be its most entertaining, as the Buffalo Bills and Kansas City Chiefs stand poised to add another chapter to their growing rivalry in this rematch of last year's AFC Championship Game from GEHA Field at Arrowhead Stadium in Kansas City, Missouri. Meeting for the fourth time in fifteen months, the Bills (11-6, 1st in AFC East) hope that … END_OF_DOCUMENT_TOKEN_TO_BE_REPLACED 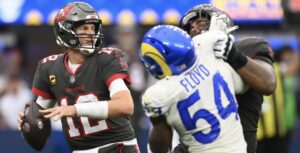 3:00 PM EST, NBC - Line: Buccaneers -3, Over/Under: 48 With half of the Divisional Round in the books, the other half kicks off today where the 2020 campaign ended in Tampa, as the reigning Super Bowl Champion Buccaneers host the Los Angeles Rams in a star-studded matchup from Raymond-James Stadium in Tampa, Florida. Before we get to the Lombardi holders, you can absolutely make the argument that the team in this particular matchup carrying the … END_OF_DOCUMENT_TOKEN_TO_BE_REPLACED