You are here: Home / Archives for Porter Moser 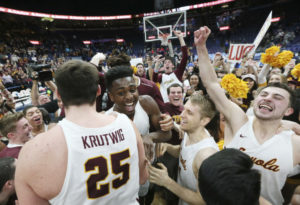 7:07 PM EST, CBS - Line: Nevada -2,  Over/Under: 143.5 It's an All-Cinderella Affair as a pair of mid-majors look to make that next, giant leap to the Elite Eight with the Eleventh Seed Loyola-Chicago Ramblers battle the Nevada Wolfpack in the Southwest Regional Semifinal from Phillips Arena in Atlanta, Georgia.  In a year in which the NCAA Tournament has been nothing short of maddening, the most unlikely of the unlikely still standing has to be … END_OF_DOCUMENT_TOKEN_TO_BE_REPLACED