You are here: Home / Archives for San Francisco 49ers 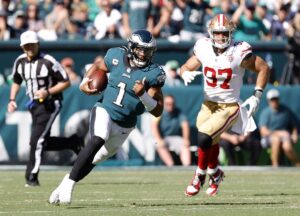 3:00 PM EST, FOX - Line: Eagles -2.5, Over/Under: 46.0 Championship Sunday is here, folks, and the first of two matchups kicks off this afternoon in the City of Brotherly Love, where the Philadelphia Eagles and San Francisco 49ers battle in the 2023 NFC Championship Game, a clash of the two most dominant teams of the season. This current incarnation of the 49ers (13-4, 1st in NFC West) may look awfully familiar to their predecessors but make no … END_OF_DOCUMENT_TOKEN_TO_BE_REPLACED 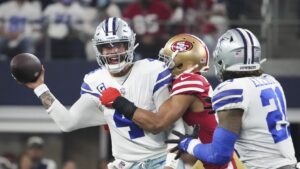 6:30 PM EST, FOX - Line; 49ers -3.5, Over/Under: 46.5 It seems that the NFL has saved the best for last, as the final entry in this year's Divisional Round of the Playoffs features the continuation of a classic rivalry, with the Dallas Cowboys battling the surging San Francisco 49ers with a place in next weekend's NFC Championship Game on the line in this matchup from Levi's Stadium in Santa Clara, California. This affair marks the ninth time that … END_OF_DOCUMENT_TOKEN_TO_BE_REPLACED 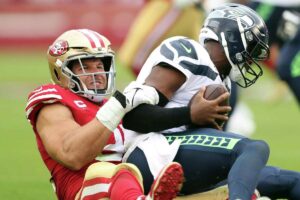 8:15 PM EST, Prime Video - Line: 49ers -3.5, Over/Under: 43.5 Week Fifteen kicks off a battle between division rivals who are traveling in opposite directions, as the red-hot San Francisco 49ers look to continue their second half surge at the Seattle Seahawks, who simply hope to keep their postseason hopes alive in primetime showdown from Lumen Field in Seattle, Washington. At this point, we can't help but wonder if the 49ers (9-4, 1st in NFC … END_OF_DOCUMENT_TOKEN_TO_BE_REPLACED 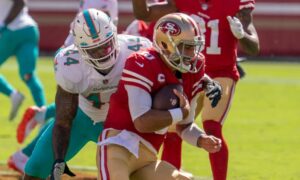 4:05 PM EST, FOX - Line: 49ers -3.5, Over/Under: 46.5 A plethora of storylines converge in this showdown in Santa Clara, as the surging San Francisco 49ers host the high-powered Miami Dolphins in what could end up being a Super Bowl preview from Levi's Stadium. Speaking of Super Bowl previews, this contest is a rematch of Super Bowl XIX, in which Joe Montana's Niners bested Dan Marino's 'Fins for the second of their four Lombardi Trophies during … END_OF_DOCUMENT_TOKEN_TO_BE_REPLACED 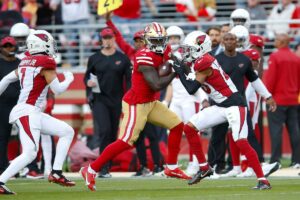 8:15 PM EST, ESPN - Line: 49ers -8, Over/Under: 43.5 Week Eleven comes to its conclusion south of the border, as the surging San Francisco 49ers and the potentially shorthanded Arizona Cardinals take their act to Mexico City for the first leg of their renewal of hostilities. Though they're only sitting one game above .500, there is an awful lot of juice building behind the 49ers (5-4, 2nd in NFC West), who when it is all said and done, may very … END_OF_DOCUMENT_TOKEN_TO_BE_REPLACED