You are here: Home / Archives for Tonronto Raptors 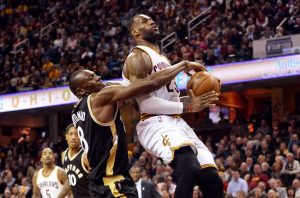 7:00 PM EST, TNT - Line: Cavaliers -7.5,  Over/Under: 214 It's not often that a Game Two is labeled as a must-win, but that's precisely where the Toronto Raptors find themselves as they try to avoid falling into a 0-2 hole against the Cleveland Cavaliers in the second entry of the Eastern Conference Semifinals from Quicken Loans Arena in Cleveland, Ohio.  After being eliminated by the eventual NBA Champions in last year's Eastern Conference … END_OF_DOCUMENT_TOKEN_TO_BE_REPLACED